At Annagh N.S. our pupils  participate in a variety of different sports like Gaelic football, Soccer, Basketball, Swimming, Track and Field events and a variety of novelty games. These  contribute to each child’s overall development by helping them to lead full, active and healthy lives. The emphasis is very much on participation, developing positive attitudes towards physical activity and enjoyment in both individual and team sports.

While the emphasis within our school is encouraging all our pupils to participate, nevertheless we do take part in all competitions which are organised on a county basis. This allows our pupils who have reached a high standard to challenge themselves against pupils their age in other schools in Co. Clare, with remarkable levels of success achieved by our small school over the years.

Both the girls and boys take part in 7-a side and 15-a-side Cumann na mBunscoil football competitions. 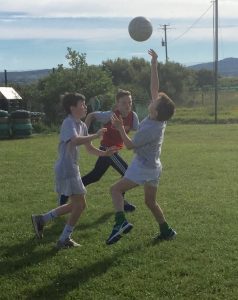 Annagh N.S. combined with another local school have won the school boy’s 7-a-side football five times in the last thirteen years.  The girls were the 7-a-side champions in 2014 and reached the quarter finals stage in 2015. In 2012 both the boys and girls of Annagh N.S won both competitions. No other school in Clare has achieved this unique double in the one year i.e. winning both the school boys and school girl’s 7-a-side competitions.

The KIB parish 15-a-side school boy’s football team have been very successful in their competition having won it five times in a row between 2009 and 2013.  Well done to them on their remarkable success over the years. We wish the boys continued success in future competitions.

The Clare GAA football skills competition for Primary Schools finals were held on the 25th of May 2016, in Cooraclare GAA grounds.  Representatives from each school were brought to display their skills.  Teams of 3 from each school showed exceptional skill in catching, passing, kicking, striking, the pick-up, soloing and scoring.  Our school was fifth most skilful school in County Clare.

The KIB parish 15-a-side school girls football team won the county final in 2010. The girl’s team were beaten by just one point in the final in 2011. They won the County Final in Cusack Park again in 2012. The girls were victorious in the County Final again in 2014. The group stages of the girl’s competition are currently underway, and we wish the girls every success again this year in the competition.

During the Autumn all pupils from 3rd to 6th class participate in our Annagh N.S. football league for senior classes. The 2015 winners  are pictured below.

Annually, the school participates in a 5-a side soccer competition held in Lee’s Road for all Clare schools. The girl’s 5-a-side soccer team won the Co. Clare FAI Primary schools 5-a-side Soccer Competition in April 2016 for the second time in a row.  The girls went on to represent Clare in the Munster finals in April 2016, but were beaten 4 – 2 by Limerick. to reach the Munster semi-finals two years in a row shows great commitment by our girls.  It is a testament to the girls’ and their coach’s hard work and dedication.

For the winter months all children from 1st to 3rd class and 3rd to 6th class participate in a schools soccer league competition. Pictured below are this years winners.

The annual KIB parish sports day takes place at Mullagh Track  and pitch in May,  in which all our pupils participate. The children that are successful on the day go on to compete at the West Clare/ North Clare Schools competition held in Lee’s Road, Ennis. Thirty eight  of our pupils went on to represent our school at Lee’s Road in 2016.  This was a remarkable achievement for our small school. Our boys were placed 3rd in the best boys’ schools category.

All the children at Annagh N.S. are given the opportunity to attend swimming classes at Lahinch Seaworld during the school year. The children in classes Third to Sixth attend the swimming pool during the school term from September to Christmas, while Junior Infants to Second Class have lessons during the terms January to April. Pupils who reach certain standards are awarded certificates at the end of the lessons.